While 2015 DSEi is now behind us, we are still catching up with post-show news!

As expected, THOR was our star performer – and even received an audience with His Royal Highness Prince Faisal bin al-Hussein of Jordan.

The Prince has an extensive military background and showed great interest in THOR's unique tactical headgear system and confirmed the positive feedback we had already received at IDEX 2015 and now at DSEI 2015. Savox had the pleasure to announce the winning of a Very Large Contract (VLC) for a  vehicle intercom project in the Middle East. The Prince was very interested in Savox IMP tactical vehicle intercom for both regular armed forces as well as special forces applications. 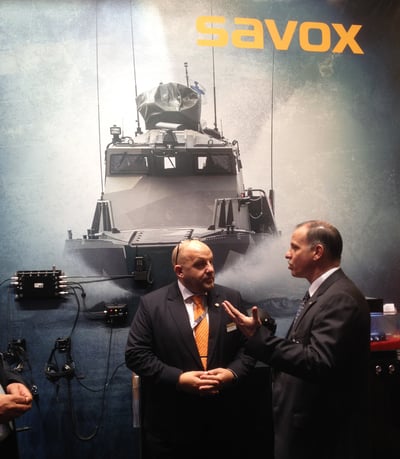 Continuing Focus on the Middle East

We have had the great opportunity to present our unique dismounted soldier systems, as well as our tactical vehicle intercom system to visitors at DSEi. Moving forward, we will continue to build our presence in the Middle East and have already made commitments for IDEX 2017. Most Popular Blog Retrospect:  Are NVG’s Giving You a Pain in the Neck?
Read more »